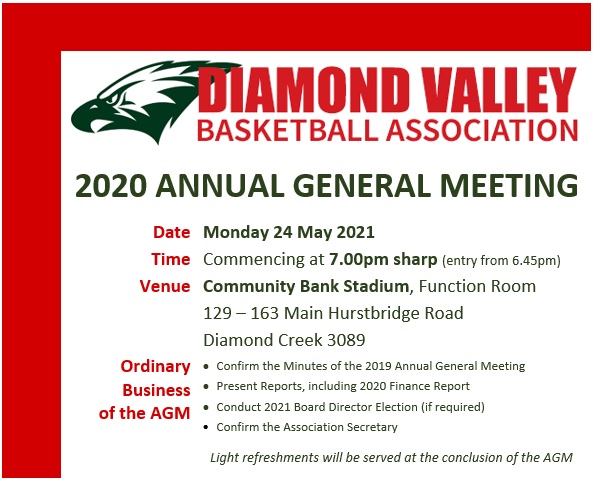 The 2020 Annual General Meeting of the Diamond Valley Basketball Association Incorporated, will be held on Monday 24 May, 7.00pm sharp at Community Bank Stadium, Diamond Creek.

We are very pleased to advise that the DVBA’s 2020 AGM will be a face-to-face meeting (if anything changes in this regard, you will be notified as soon as possible and the meeting will then be hosted virtually).

THE CONSTITUTION OF THE DVBA

Members should take particular note of the following rules from the Constitution:

Rule 9 Delegate
9.1 The Member, other than a Life Member, is entitled to be represented at any Meeting of the Association by its Delegate.

If your Team or Club wishes to bring any business before the AGM, please advise of such in writing to the Secretary, by Friday 14 May 2021 so that it may be considered for inclusion on the AGM agenda.  The agenda will be distributed one week prior to the meeting.

Rule 26 Election of Directors
26.5 Nominations of candidates for election as Directors of the Association must be:
(a) made in writing, signed by two (2) Members of the Association and accompanied by the written consent of the candidate (which may be endorsed on the form of nomination); and
(b) delivered to the Secretary of the Association not less than seven (7) days before the date fixed for the holding of the Annual General Meeting.

At the 2020 AGM, the following Board Director positions will be declared vacant:

The DVBA Board Director Nomination Form is available here.

DVBA Board Director Nomination Forms must be submitted to the Secretary, seven days prior to the AGM – by no later than close of Business on Monday 17 May 2021